Leeds Rhinos Wheelchair are through to their Wheelchair Grand Final for the sixth time in their history after securing a 54-14 win over London Roosters at Leeds Beckett University.

The Rhinos have featured in the last five Wheelchair Super League Grand Finals, winning their first title in 2018 before regaining the title from fierce rivals Halifax Panthers in 2021 as part of a historic first treble. They will now take on either Halifax or Wigan Warriors in the Grand Final on Saturday 1st October at The University of Central Lancashire.

Nathan Collins took the lead for the Rhinos after 10 minutes, but he was unable to add the conversion and the Roosters soon levelled the game at 4-4.

Great play from Nathan Collins helped put Leeds back in front after he made his way up court, evading the tackles to offload the ball to his supporting team mate and the ball was then spread wide to Jodie Boyde who went over in the corner. Collins added the conversion.

After a period of Wigan pressure Tom Coyde got another try for the visitors but Joe Coyde could not add the extras and it wasn’t long before Leeds were in again to take control of the game.

Leeds extended their lead after dominant play and James Simpson spotted Collins on the wing and the England international stretched out across the smallest gap in the corner to get the ball down. Halliwell then extended the lead before the break with a penalty after the Roosters were punished for offside.

Leeds took little time to get on the score board in the second half with Collins setting up Josh Butler for his first try in the corner.

Minutes later they were in again after a well worked try across the Roosters try line found James Simpson with space in the corner 26-8.

Josh Butler then went the length of the pitch for a brilliant solo try and Collins on target with conversion to make it 32-8.

Nathan Collins continued to impress in the second half and managed to crash over and get the ball down despite the desperate attempts from Roosters to tackle him. Halliwell added conversion to bring the score to 36-8

Butler then completed his hat trick minutes later and Halliwell converted. 42-8. After an impressive performance Butler was forced off after a knock and Ewan Clibbens returned and made an instant impact when he collected an overhead pass from Collins and raced clear in the corner and once again Halliwell converted to make it 48-8

Wigan git a late converted try to bring the score 48-14 but Leeds still had more in them and replacement Paul Horrobin completed the win and got one of the biggest cheers of the game with his last minute try which Halliwell converted to bring the final score to 54-14 sending the Rhinos back to the Grand Final.

The Wheelchair Super League Grand Final will see Leeds Rhinos face old foes Halifax Panthers on Saturday 1st October at the National Basketball Centre in Manchester, which will be shown LIVE on Sky Sports with a 3:30pm kick off. 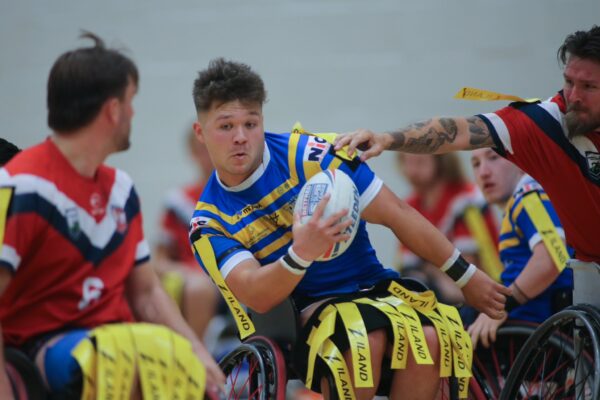 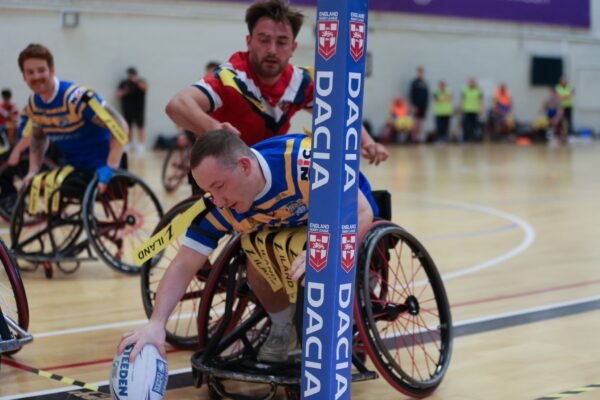 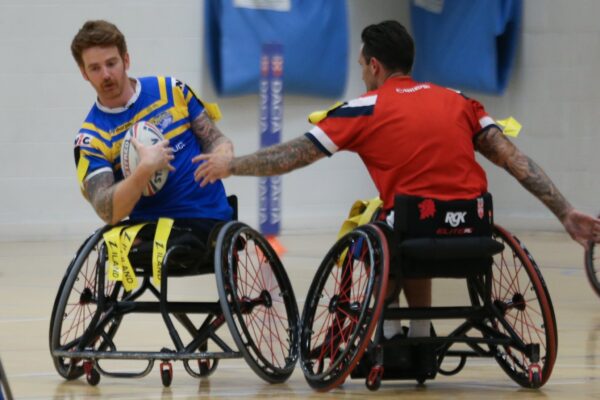 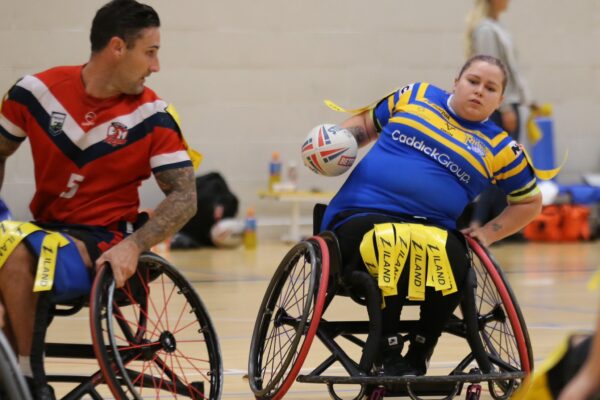