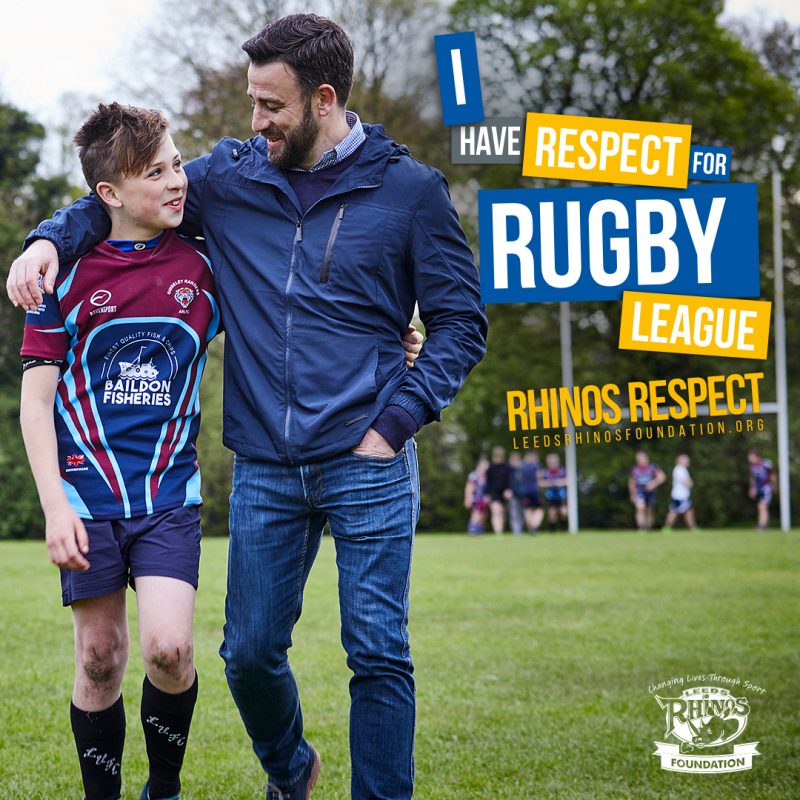 Leeds Rhinos Foundation is backing the Rugby Football League’s ‘Enjoy the Game’ initiative and has relaunched their own Rhinos Respect campaign.

Enjoy the Game’ is a game-wide campaign that will continue to stress the importance of behaving with respect at all levels of the game. This year, there will be fresh impetus on the ‘positive’- helping to promote encouraging environments throughout Rugby League.

As part of Leeds Rhinos Foundation’s Rugby League Development Plan, sponsored by Mears Group, Foundation staff will be working with all Leeds Rhinos’ Ambassador Clubs to promote the ‘Enjoy the Game’ and Rhinos Respect campaigns.

Rhinos Respect is a response to concerns from across the game about unacceptable touchline behaviour in Rugby League and it aims to improve the conduct of those involved in the game to create a more positive place in which children can play.

“Our aim at Leeds Rhinos Foundation is to promote, at all times, a respectful and all-inclusive environment that is not intimidating or hostile for families, players and referees.

“We are therefore delighted to be backing the RFL’s ‘Enjoy the Game’ campaign and work with clubs on our own Rhinos Respect campaign, which complement each other well. We have been really pleased with the support from the community game and we will continue to promote the messages throughout the season.”

In 2018, the RFL carried out a review in the 12-18 Age Group, and also conducted online surveys of the Open Age game. The aim was to listen and understand which areas have the biggest impact on participation in Rugby League. The headline findings of the report showed:

Kevin Sinfield MBE, Leeds Rhinos Director of Rugby and Ambassador for the Rhinos Respect campaign, believes this is an important issue for the game to address.

“Respect must come from us all; whether you are a professional player, a community club player, a referee or match official, young or old, a parent or club member,” said Sinfield.

“Creating safe and enjoyable environments where we can nurture young players and promote family togetherness has got to be everyone’s aims. Respect must be encouraged by role models, parents and coaches but equally we must, in turn, respect our opponents, referees and ourselves.”

As part of the Rhinos Respect campaign, each Leeds community club will receive posters which will be displayed around their clubs asking for spectators to be respectful to those playing the game and to set a good example. Leeds Rhinos Foundation will also be promoting the respect messages through their social media accounts and will share video messages from Leeds Rhinos’ players and staff.