Leeds Rhinos Foundation are helping to get the World Cup party started in Leeds this Sunday with the final festival of the Community Integrated Care Learning Disability Super League (LDSL) season at Headingley Stadium.

The showpiece will act as a launch event for the wider festival of Rugby League World Cups taking place in England this October, and will see more than 20 teams and 300 players with learning disabilities kicking off the festivities for the most inclusive tournament ever.

The Headingley festival has been organised by the RFL in association with RLWC2021 and Community Integrated Care, with each team of LDSL players adding some international flavour to the event by representing one of the nations competing in the main tournament- featuring the men’s, women’s and wheelchair competitions- which kicks-off in Newcastle on Saturday 15 October.

Spectators are welcome to attend Sunday’s festival free of charge and can enjoy the action from the South Stand terrace, with the first games getting started at 10:30am.

Matches will be played across six different pitches on one of the most iconic grounds in rugby league, providing a special backdrop for participants to showcase their rugby skills through a specially adapted, non-competitive version of Rugby League which focuses on encouraging participation and skills development.

Earlier this month, two stars of the Leeds Rhinos LDSL side, Jenny Robinson and Declan Jenkinson, joined England Wheelchair Rugby League international James Simpson to conduct the draw for the World Cup-themed festival. With the Rhinos LDSL squad being split into two different teams for this festival to ensure all 17 players receive plenty of game time, Team Yellow will be hoping they have the luck of the Irish as they represent the Shamrocks, whilst Team Blue will be looking to bring out their carnival spirit whilst playing as competition debutants Brazil.

Check out a full list of the teams taking part in Sunday’s festival and the nations they will be representing here: 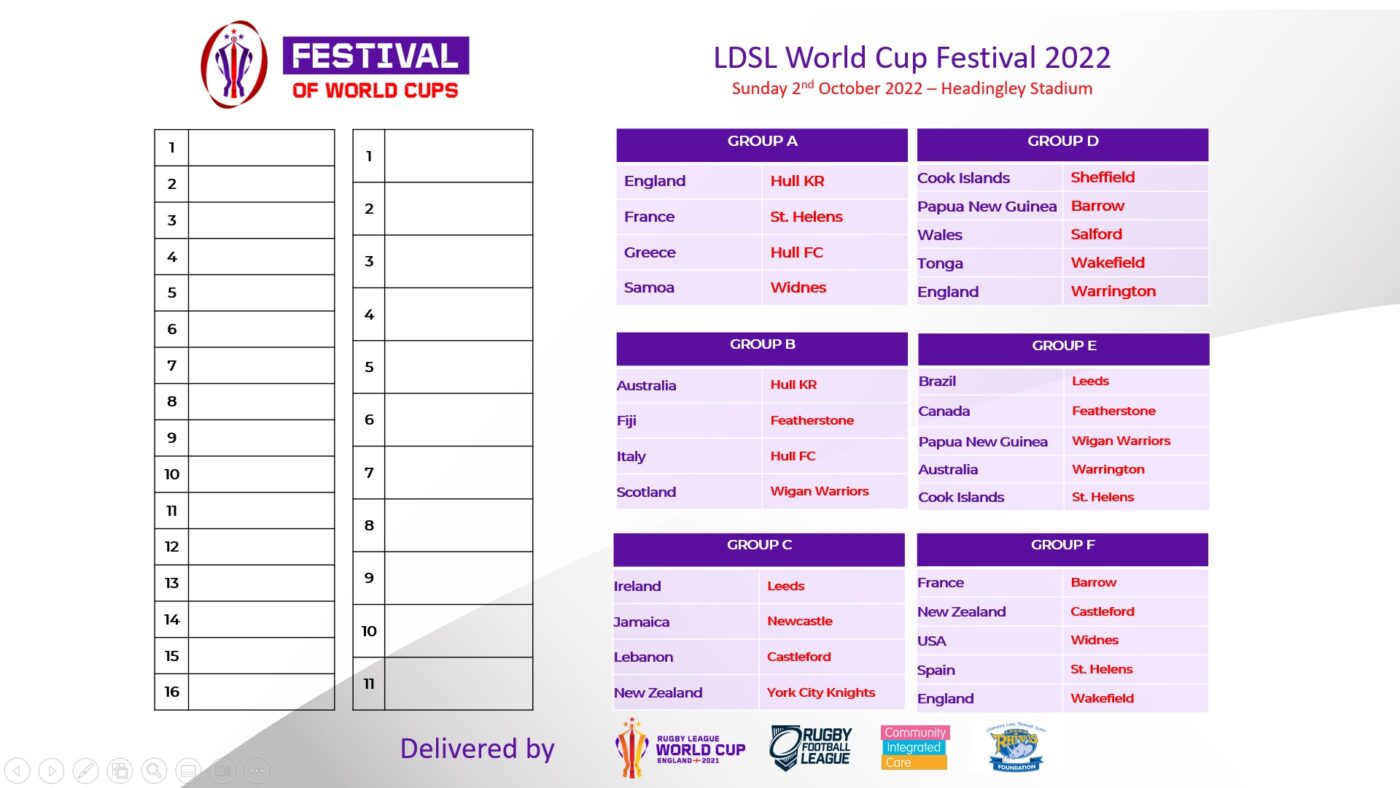 Speaking about his excitement for hosting the LDSL World Cup Festival, Leeds Rhinos Foundation’s Disability Officer Ed Bates said: “The Rhinos players can’t wait to be playing in their final festival of the LDSL season at Headingley Stadium this Sunday.

“The fact that it’s being played at their home stadium on the pitch where their Leeds Rhinos heroes play every week, plus being part of the Rugby League World Cup celebrations, makes it extra special and is a unique experience which will create lifelong memories for all involved.

“We look forward to welcoming all the different teams and community Foundations to experience Headingley Stadium on what promises to be a magnificent festival of disability rugby league played in a great atmosphere as hundreds of people enjoy the chance to live out their dreams.”

John Hughes, Director of Partnerships and Communities at Community Integrated Care, commented: “We’re all looking forward to Sunday and being part of the Festival of World Cups. Nearly 300 players from 15 different Rugby League club foundations will take to the field at one of the best stadiums in the country. It’s a mouth-watering prospect for everybody involved and the festival can’t come soon enough.

“Our relationship with the RFL has changed countless lives and transformed the opportunities that exist for many people, with disabilities, and the support we have had from RLWC2021 has been fantastic. What we offer is unique in world sport and is something the whole of Rugby League can be proud of.”

To get involved in the Community Integrated Care Learning Disability Super League with Leeds Rhinos Foundation, or for further information about the LDSL World Cup Festival, please contact: ed.bates@leedsrhinosfoundation.org.