The full lineups for the 2022 Leeds & Hunslet Schools Cup Finals have now been completed after Crawshaw Academy and Allerton Grange became the last two teams to book their place in this week’s Year 9 Semi Finals at Kirkstall.

This year’s finals will once again take place over two evenings at the South Leeds Stadium in Hunslet, with the Year 8 and 10 Finals taking place on Monday 31st January, before the Year 7, 9 and 11 winners will be crowned a week later on Monday 7th February.

As in previous years, the finals will be hosted by Leeds Rhinos Foundation in conjunction with Leeds & Hunslet Schools Rugby League and will provide a fitting stage for the best High School Boys teams in Leeds to do battle and showcase their talents, with players from the Leeds Rhinos First Team will on hand to present the youngsters with their medals and trophies.

Organised rugby in Leeds schools has a long and proud history stretching back almost 120 years and this year’s Finals promise to be some of the best yet, with the high standard of matches played at the Semi Final events providing a real treat for everyone in attendance.

Let’s take a look at this year’s finalists and the prizes they will be playing for:

It is thought that the Goldthorpe Cup is the oldest trophy, still being competed for, in schools’ rugby league. The minutes of 15th January 1904 record that: Mr T V Harrison, on behalf of the Hunslet Cricket Football and Athletic Club, presented to the Schools’ Union the handsome Goldthorpe Trophy

In 2018 the Goldthorpe family decided to support a competition for girls with the aim of giving the name of Leeds’ first sporting superstar, and his brothers, further links to the present day game and to a new generation of players and supporters. To reflect the history of the Goldthorpe Cup, and to mirror the boys’ competition, the girls’ cup is also played for at Under 13 age-level.

Named in honour of Thomas Vernon Harrison, a teacher at Christ Church School, Hunslet, the first chairman of the new association and also the first chairman of LSRFU back in 1903, the shield was purchased by the new Hunslet SRFU in 1922, to be presented to the winners of the senior league. Returns to Under 15 winners after a switch to Under 14s in 2020. 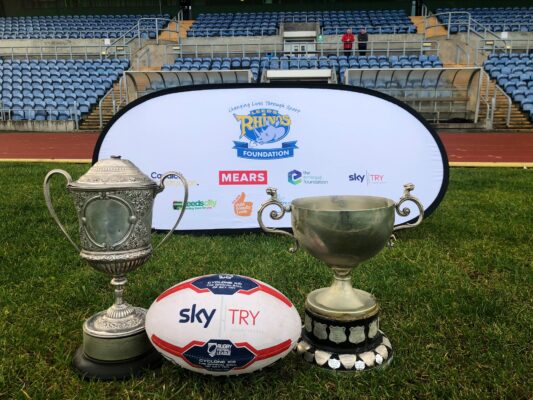 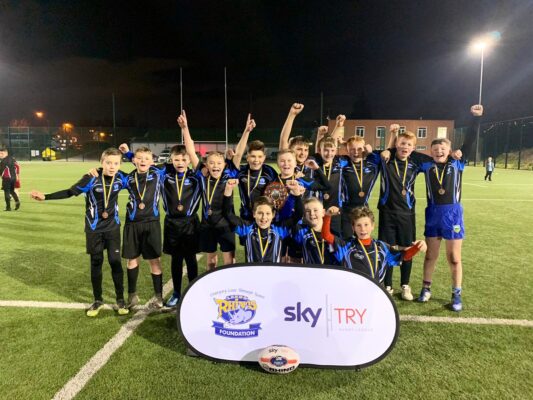 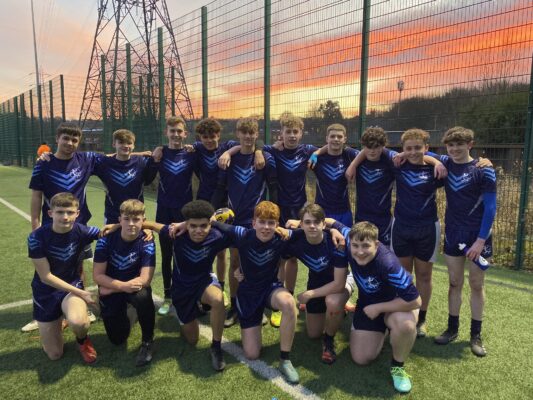 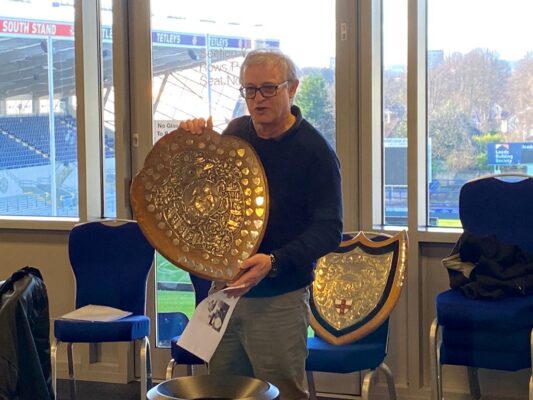 The trophy was presented to the Hunslet SRFU in 1921 by Councillor W H (“Billy”) Gilston, who had been a founder and captain of the Hunslet Club in 1883. Originally a knock-out cup, after the Second World War it was used for a number of different competitions. From 1967 until 1985 it was used as the Under 14 knock-out cup and then re-introduced for the Under 12 competition in 2014. The trophy bears the inscription: For the annual competition amongst the boys of Hunslet to encourage a love for Healthy Outdoor Sports.

The fourth and final trophy presented by the Leeds Rugby League Supporters’ Club, named in memory of Ken Lee, a trustee of the club. The trophy was previously presented to the Under 13 champions from 1980-81 to 1999-2000 and Year 9 ‘Nines’ tournament winners, but is making it’s first appearance as the prize for the Under 14 Cup Final in 2022.

The Jas Wilson Cup (donated by James W Wilson, director of William Wilson & Sons Ltd, “perambulator and toy makers of Guiseley”, later to become Silver Cross) was first awarded in 1933 to the winners of four-team play-off involving the two two sides in the Leeds and Hunslet leagues. This is the first year it will be awarded to the Under 16 Cup winners.

Steve Boothroyd, Secretary for Leeds & Hunslet Schools Rugby League said, “After a break of 18 months, it has been great to see the number of schools involved in competitions and festivals so far this season.

“It will be great to be back at the South Leeds Stadium for the first high school finals since February 2020, which is without doubt one of the main highlights of the year for Schools Rugby League in our city.

“I will like to give a big thank you to the Leeds Rhinos Foundation for all their hard work in organising the games and wish the best of luck to all our finalists.”

Entry on the night by suggested donation to Leeds Rhinos Foundation of £2 per person, and all money raised will go towards supporting our Rugby League Development programmes and providing more young people across the city with opportunities to play the game.

We will also be providing score updates from all the Finals, as well as video highlights and photos, on our official Twitter account- @RugbyLeeds.

For more information about the trophies and a detailed look back through the rich history of the Leeds & Hunslet Schools Cup competition- including full lists of past winners- please CLICK HERE to visit their official website.

To learn more about our work on High Schools Rugby League in Leeds, please CLICK HERE. 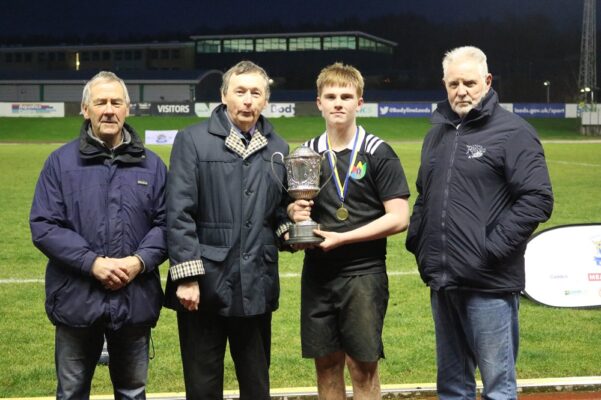 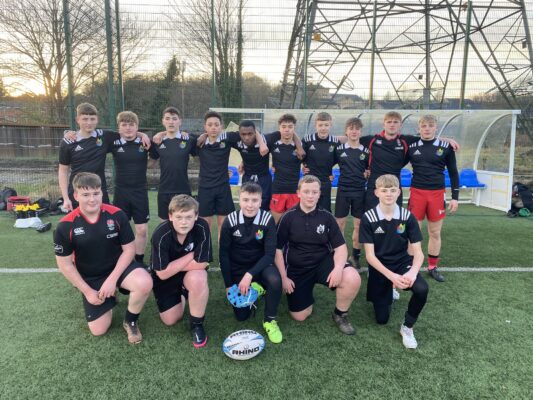 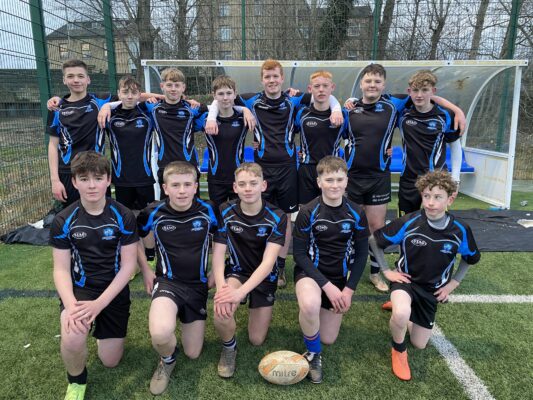 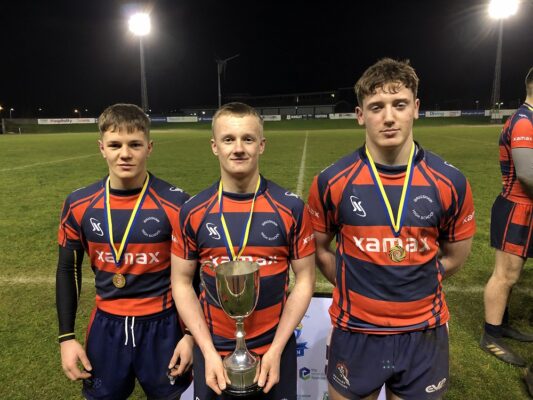