Leeds Rhinos Foundation’s In Touch dementia support group are set to take on their own ‘Extra Mile’ walking challenge this month in honour of two of their favourite past Leeds Rhinos players, Kevin Sinfield and Rob Burrow.

The group will follow in the footsteps of Sinfield by putting their own spin on his mammoth ‘Extra Mile’ fundraiser, which saw the Rhinos icon raise over £2 million for Motor Neurone Disease charities by running 101 miles from Leicester to Leeds in just 24 hours.

Inspired by this incredible feat, the group of avid Rugby League fans were keen to set up their own fundraising challenge for people affected by MND including Rhinos legend Rob Burrow, who is a good friend of the group having visited them on two occasions. That’s why they have now been tasked by Health Officer Amy Livingstone to complete 101 miles of walking over the course of the next four weeks, which was revealed to them last week during their monthly meeting at Headingley Stadium.

For the challenge, the group will have 35 days between their meetings in May and June to collectively reach the 100 miles mark by adding up all the walking they do in that time. They will then come together at Headingley Stadium on Thursday 9th June to complete their own ‘extra mile’ around the pitch at Headingley Stadium, which totals four and a half laps of the hallowed turf.

Family and friends will be in attendance to cheer them over the finishing line, and hopefully provide an enjoyable occasion for all the members to celebrate the completion of this special fundraiser. 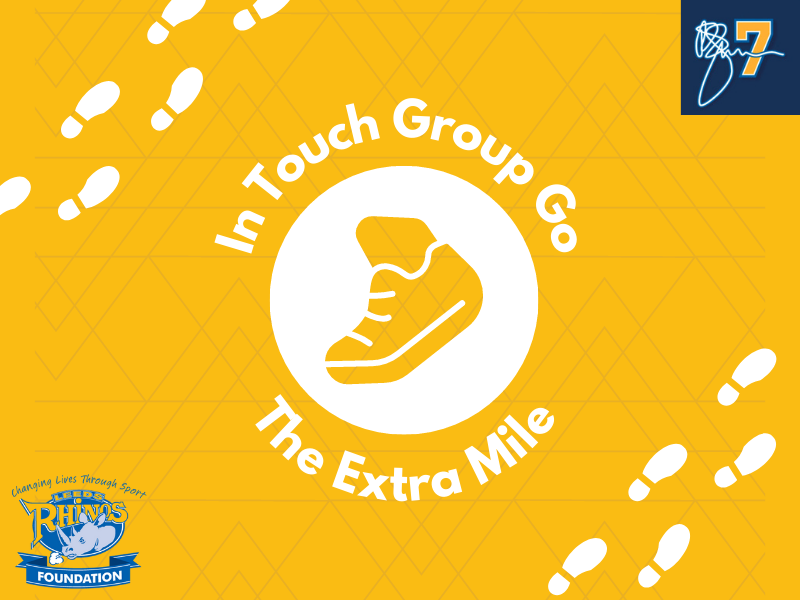 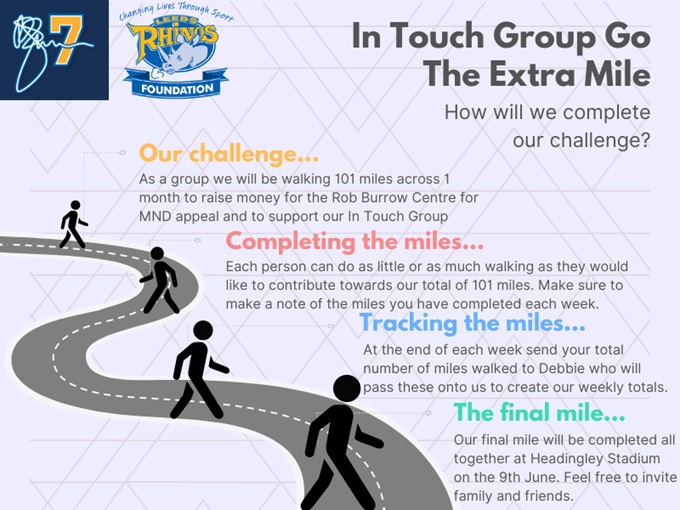 The In Touch group was launched four years ago and supports people living with dementia, as well as their family members and carers through a monthly group session at Headingley Stadium. Each month, Leeds Rhinos Foundation invites special guests to share their story with the group, reminisce about special memories and re-live some magical sporting moments.

Over the years our group has had many fantastic speakers and back in 2019 the group got to meet one of their sporting heroes Rob Burrow, a session that is still spoken about today.

Burrow was diagnosed with motor neurone disease in December that year and since then has publicly championed raising funds and awareness for everyone impacted by the disease. It has led to an award-winning documentary and best-selling autobiography but Burrow’s greatest achievement and latest goal is to realise the dream of a new MND Care Centre in Leeds that will bear his name. Therefore, funds raised by this charity challenge will be split between the Leeds Hospital Charities’ appeal for this Centre and Leeds Rhinos Foundation to help with the running of the In Touch group.

Commenting on the launch of the challenge, organiser Amy Livingstone said: “Since Rob was diagnosed with MND the group have been following the inspiring work of him and Kevin to raise awareness and money to support people diagnosed with MND and it felt only right to take on an ‘extra mile’ fundraising challenge of their own to raise money for this fantastic cause.

“We kept the planning of the challenge a surprise to the group who found out last Thursday after completing a treasure hunt around the stadium, risky business when you are asking them to walk 101 miles in a month. Rob Burrow created a magical moment for our group back in December 2019, and now the group are ready to support Rob and take on this challenge with great enthusiasm and desire to raise as much money as they can.”

If you would like to support our In Touch group and donate to their ‘Extra Mile’ fundraising challenge, please CLICK HERE TO DONATE.

For more information about the In Touch group or to find out how to get involved, please email health@leedsrhinosfoundation.org.