The flying centre has lit up the PDRL League with a string of impressive performances and almost staged his own try of the season competition, scoring several length-of-the-field efforts and displaying lightning speed with ball in hand.

Reflecting back on an impressive first season with the Rhinos, Gobin– who plays his community club rugby for Drighlington- says that he has relished the opportunity to become a key member of the team.

“I’ve really enjoyed my rugby this year and I’m glad I came with Simon [Brown] after he encouraged me to come along and give it a go.”

“It’s certainly been a different experience. It was quite hard to adapt to PDRL at first with different rules to learn, but other than that it’s been a nice change and I’ve made the most of it.”

“I’ve played with a great set of lads and that’s helped me to play well and improve my game. I have to praise them because they’re the ones who give me the ball and put me through the gaps. At the end of the day it’s a team effort and the results are what really matter.” 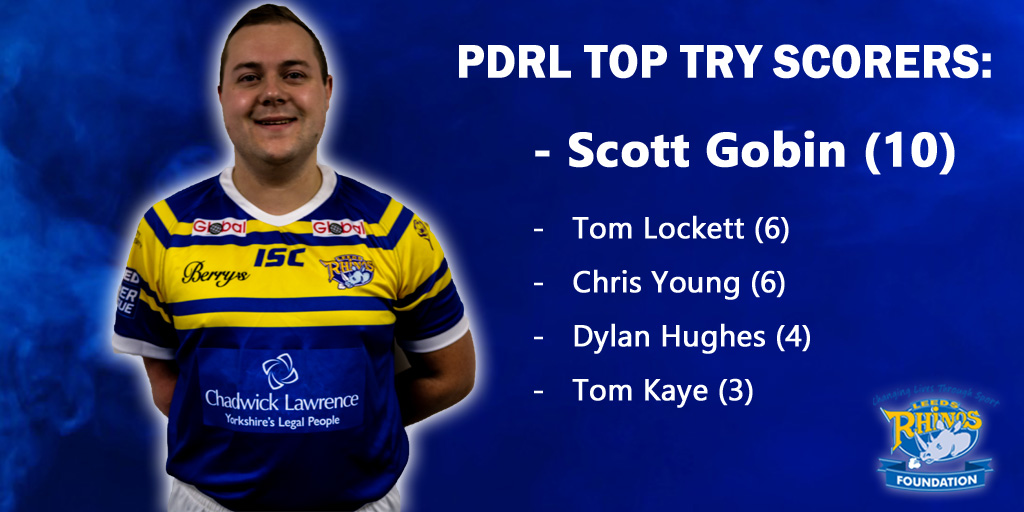 Despite a second defeat to league leaders Warrington, the ‘Grand Day Out’ festival in Blackpool proved to be Gobin’s most fruitful, bagging try-scoring braces in both matches to take his overall tally for the season into double figures.

With Finals Day now on the horizon, Gobin believes there is still more to come from the Rhinos as they go in search of the PDRL League trophy.

“We’ve suffered a couple of really tough losses to Warrington and Wakefield so far, ones that we could have possibly won.

“The lads are still in good spirit and the belief is there. I think we’ll really show what we’re about and bounce back to perform well at Finals Day. We’ll be playing in front of a big crowd and it’s going to be a great buzz for the lads. Hopefully it will then encourage others to come down and give it a good go.”

Come see Gobin and the rest of the Leeds Rhinos PDRL team battle it out with Warrington Wolves, Wakefield Trinity and Castleford Tigers at the first ever PDRL Finals Day on Sunday 29 September!

Entry is FREE for all spectators, with gates opening at 1pm. Car parking is available onsite at Selby RUFC’s Sandhill Lane ground, along with food and drink facilities including a licensed bar. For more information, click HERE.