Leeds Rhinos Foundation will be taking their Physical Disability Rugby League team ‘on the road’ when they host the first ever PDRL League Finals Day at Selby RUFC on Sunday 29th September.

The showpiece event will see the top four sides from the 2019 season- Leeds Rhinos, Warrington Wolves, Wakefield Trinity and Castleford Tigers- battle it out to be crowned as the first ever PDRL League Champions, in what promises to be another spectacular showcase of this exciting, inspirational form of rugby league.

With both Emerald Headingley and Weetwood Sports Park unavailable, Rhinos PDRL star Chris Young- who works as Clubhouse Manager at Selby RUFC– has kindly offered Leeds Rhinos Foundation the chance to host Finals Day at their Sandhill Lane ground, which boasts state-of-the-art facilities including a seated stand, licensed bar and changing rooms for each side.

Commenting on the move, Young said: “Our Rugby club is a big part of the community in Selby and I felt it was a great stage to broaden the sport with many rugby clubs nearby. It also gives us an opportunity to pull in a big crowd and showcase our wonderful sport in a fitting venue for the inaugural Finals Day, which we’re all excited about.

“We have some very inspirational people in PDRL and this will give them the stage to inspire the next generation of people with disabilities to become involved with the sport.”

2019 has been a momentous year for PDRL England, with teams already enjoying some unforgettable experiences, such as the half-time exhibition at Liverpool’s iconic Anfield Stadium during Dacia Magic Weekend when the Rhinos faced Warrington in front of more than 30,000 spectators.

It is also the first time that the sides have competed in a competitive league season, facing each other twice across a series of festivals hosted by each participating club, starting with Wakefield back in April and finishing with the Grand Day Out in Blackpool last weekend.

Team Manager and Disability Co-ordinator for Leeds Rhinos Foundation Ben Berry said: “It’s great to be hosting the PDRL Grand Finals at Selby, where we can use their fantastic facilities and showcase our sport to people who might not have had the chance to watch it before.

“We aim to create an amazing spectacle illustrating the inspirational characters that we have in the game alongside some quality rugby league action. I would encourage anybody who is available to come down and watch on September 29th, especially Rhinos fans as your support would be a huge boost for the team!”

Thank you to our PDRL team sponsor Chadwick Lawrence for their continued support. Visit www.chadwicklawrence.co.uk/ 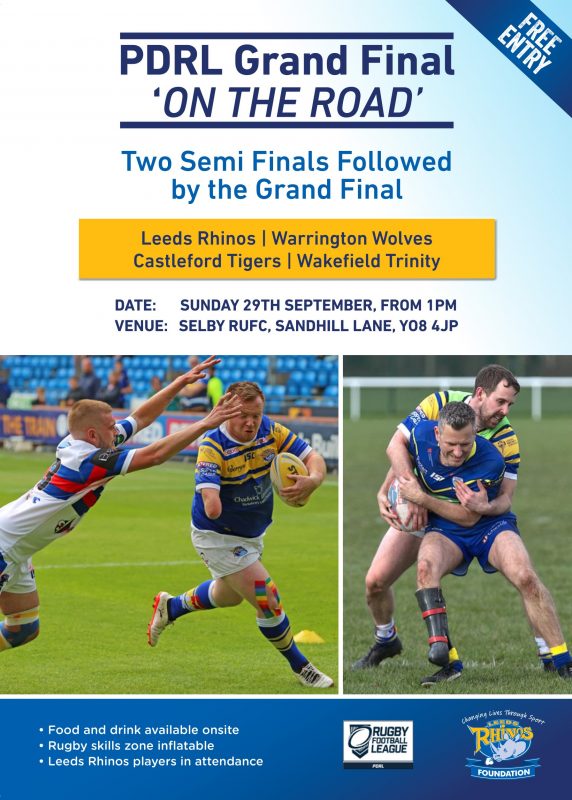