After spending 18 months without being able to enjoy their monthly meetings in person due to the coronavirus pandemic, the Foundation’s In Touch Dementia club are now finally able to get together at Emerald Headingley Stadium again to enjoy fun social afternoon with their peers!

To celebrate their return to the stadium after the prolonged absence, the group were invited to take part in a special stadium tour to enjoy an exclusive look at some of the areas that have been transformed since they were last able to meet up at the stadium.

This obviously meant a visit to the brand new John Holmes statue, which was placed outside the South Stand last year to celebrate one of Leeds Rugby’s greatest sons. But there was one extra surprise as John’s brother Phil Holmes, chairman of Leeds Rhinos Players Association, popped along to deliver a special presentation to the group all about the statue, providing every important detail right from the design process to the unveiling ceremony.

The first statue in the 130 years history of Emerald Headingley Stadium, which stands eight feet high on a Yorkshire stone base, was commissioned as a permanent tribute to a rugby league icon at a cost in the region of £110,000, which was raised by part public subscription and private donation via the Leeds Rhinos Foundation.

Following their visit to the statue of John Holmes, the In Touch group were then taken by Phil and Health Improvement Officer Amy Livingstone to view the heritage displays on the walls of the new North Stand. Here, members were able to view images and text on the displays remembering some of the greatest moments and players in the history of Leeds Rugby, helping them to reminisce about some of their favourite rugby league memories. 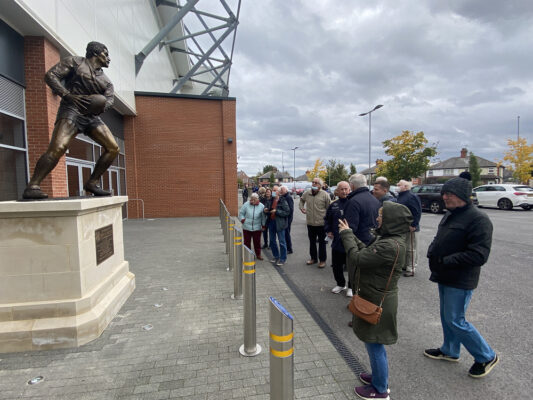 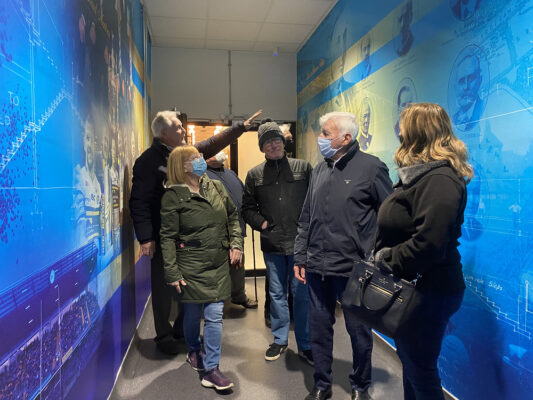 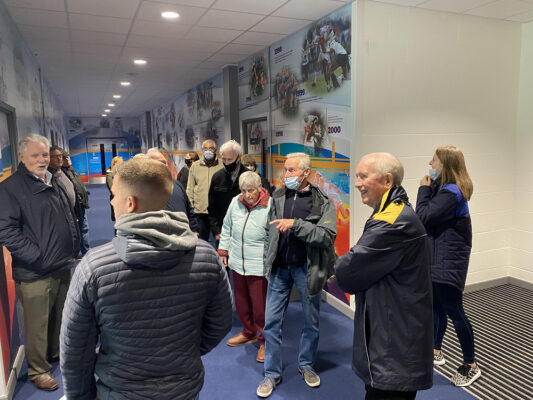 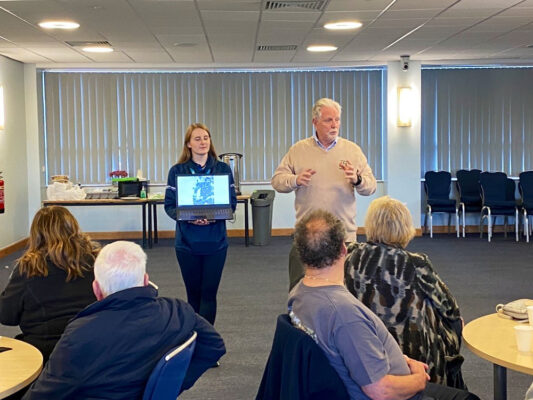 The specially commissioned display in the players tunnel at Emerald Headingley celebrates a selection of 130 players who have represented the club over that period. The list spans the history of the club from 1890 and is divided into ten players per thirteen positions. The final list was formulated using a variety of sources to give a full spread of players from across the history of Headingley.

Before leaving, there was just enough time on the tour for the group to grab a quick look inside the Rhinos’ changing rooms and have their photos taken in front of the players’ lockers. Many of the group are lifelong Leeds Rhinos fans and were extremely pleased to get this behind-the-scenes look at the club’s redeveloped home, which continues to evolve into one of the country’s finest sporting grounds.

It was fantastic to see our In Touch dementia group back at Emerald Headingley Stadium with smiles on their faces, and we’re already looking forward to next month’s meeting ahead of the now infamous Christmas party in December!

Working in partnership with Leeds Peer Support Service, the free monthly In Touch service allow people with dementia to get together, relive memories of rugby league and talk to legends of the game in a relaxed and familiar environment. New members are always welcome and it is completely free to attend!

For more information on how to get involved with our In Touch group, please email health@leedsrhinosfoundation.org.