On Sunday 12th December, players from all Leeds Rhinos teams will come together to support a unique fundraising event at Headingley Stadium for the club’s official charity Leeds Rhinos Foundation.

Fans are invited to join players from the Leeds Rhinos Men’s and Women’s teams, Leeds Rhinos Netball and Leeds Rhinos Foundation’s Wheelchair, Physical Disability and Learning Disability teams to take part in a 5k walk around the stadium.

A special route has been designed that takes the public all the way around the complex in a 1km walk with people encouraged to gain sponsorship from friends, family and colleagues to complete five laps.

The ‘Rhinos Festive 5K and Family Day’ takes place from 10am until 1pm and funds raised will support the incredible work of the Leeds Rhinos Foundation in the city plus a donation from the day will also be made to the appeal to build the Rob Burrow MND Care Centre in Leeds.

The 5km walk is open for anyone to join in, they must register in advance (it is free) and fundraise to be a part of it. Fans can register by CLICKING HERE. 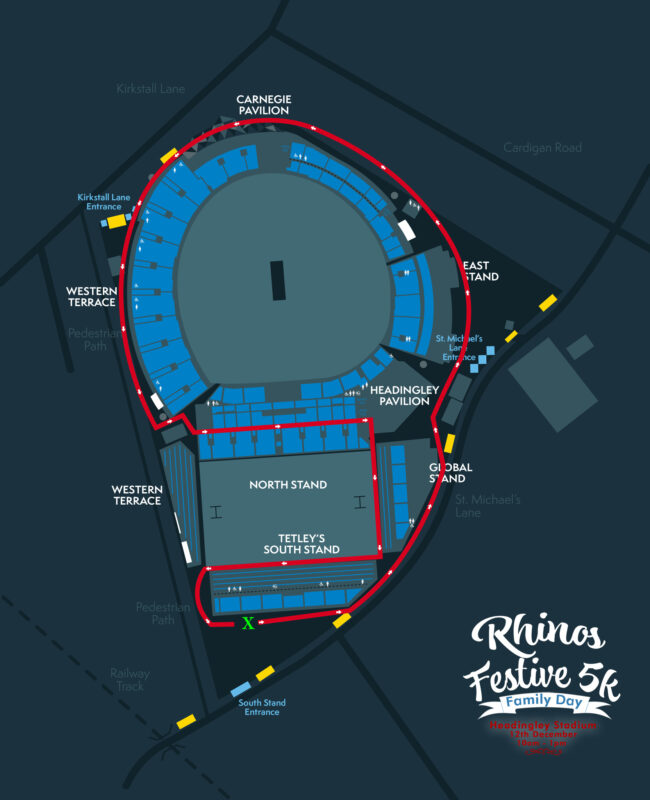 There is a special fundraising page for all donations that those taking part can share with their own family and friends at https://www.justgiving.com/campaign/RhinosFestive5k.

All walkers will register in South Stand concourse / South Stand Office on arrival between 10am-10.45am and the walk will start at the John Holmes Statue at 11am.  Festive fancy dress is encouraged so dig out the Christmas jumpers and Santa hats and there will be prizes for the best dressed walkers on the day.  Car Parking is free and available in Car Park F on the day.

What will the route be?

The 5km route travels around the full perimeter of Headingley Stadium, encapsulating both the Rugby and Cricket stadiums. Starting at the rear of the Tetley’s South Stand next to the John Holmes statue, walkers will make their way down St Michael’s Lane and enter the stadium forecourt via Gate B. From there, walkers will make a full lap of the Headingley cricket ground, walking past Tryzone and through the North Stand until reaching the corner with the Global East Stand.

To finish, participants will go along the front of the Global East Stand, taking a right and making their way down the full stretch of the Tetley’s South Stand before exiting via the South West corner and back to the starting point where the next lap will begin.

Each lap of the stadium totals 1km, meaning everyone will complete 5 laps in order to complete this festive challenge.

What else is happening on the day?

The South Stand Car Park and South Stand concourse will be full of festive entertainment and food and drink along with an Under 10s Rugby Festival taking place on the pitch and player interviews after the walk which fans can enjoy from the South Stand terrace and seats. Although we would like as many people as possible raising funds by doing the walk, those who are not feeling so energetic, can come along with their family and friends to enjoy the Christmas atmosphere at the stadium instead – it is free!

What will the fundraising event support?

Through the funds raised, the Leeds Rhinos Foundation will be able provide equipment and put on events throughout the City to increase sporting participation, especially amongst females and those with a physical and learning disability.

Leeds Rhinos Foundation is a charity committed to changing lives through sport and making sport accessible for all. In 2018 the charity launched its first Physical Disability team who competed in the UK’s first PDRL fixture. This was followed by the creation of a Learning Disability Super League team who have represented the Rhinos in festivals and games at venues such as the world famous Anfield.

The charity’s work with the city’s community teams has helped support the game at grassroots level with more players able to access the game and fulfil their potential. The women’s and girls game has grown massively over the last decade and over half of the Rhinos Women’s team have come through the Academy, which is run by Leeds Rhinos Foundation.

The progression of the Wheelchair game has been another success story of inclusivity in the sport and more people are now playing with the Leeds Rhinos Wheelchair team who won the treble in 2021.

Who are the teams taking part?

Players and staff from the new look Rhinos men’s squad for the 2022 season will be taking part in the Festive 5K along with players from the club’s Academy. Here is a look at the teams who are more recent additions to the Rhinos family who will also be joining in the fundraising event.

In 2018 the charity launched the Leeds Rhinos Physical Disability Rugby League team, who competed in the UK’s first PDRL fixture. PDRL is an exciting, all-action variant of Rugby League, packed with big hits and spectacular tries just like the able-bodied Super League. PDRL is a modified version of the game for anyone that has a Physical Disability and/or acquired brain injury that would usually stop them from playing full contact Rugby League, with each team consisting of full contact disabled players, disabled tag players and ‘able-bodied’ players who help to facilitate games. The team compete with five other Super League clubs in the PDRL League and the sport is continuing to gain momentum in the UK, with several members of the Rhinos side set to feature in the first ever PDRL World Cup in 2022.

The Learning Disability Super League team who have now represented the Rhinos in festivals and games at venues such as the world-famous Anfield and Old Trafford. Learning Disability Rugby league is a non-competitive, modified version of the game using tags rather than contact tackles. Weekly training sessions develop core skills, specific rugby league skills as well as providing opportunities to socialise, gain confidence and become part of a team. The side are part of the Community Integrated Care Learning Disability Super League, a ground-breaking inclusive sports programme which gives people who have learning disabilities and autism the chance to play a specially adapted version of rugby league for the clubs that they love and live out their sporting dreams.

The Leeds Rhinos Wheelchair team were launched in 2011 and played their first game in 2012. The club is run by a group of volunteers dedicated to creating opportunities for people to play the sport they love. The team, captained by England international James Simpson, were Challenge Cup winners in 2019 and in 2021 clinched the treble for the first time in their history.

New players are invited to join the side and can come along to training sessions at Morley Leisure Centre each Tuesday, 7-9pm. To get involved or for more information about the team, please contact andyg@spider-y.org.uk or call 07769938798.

In 2019 they secured the Super League and Challenge Cup double and had four players named in that year’s England squad. In 2021 they were unbeaten in the league and made it through to the semi-final of the Challenge Cup and the Grand Final for the third time.

Alongside the first team, Leeds Rhinos Foundation run the Leeds Rhinos Women’s Academy and work with community clubs and schools across the city to encourage more girls to play and to help develop the next generation of players. More than half of the current squad have come through the club’s Academy system.

In 2018 Leeds Rhinos Netball were awarded the England Netball Pathway for Yorkshire and entered an U19 team into the national league and a year later were granted a license for 2021 Superleague Netball competition to bring back elite netball to Yorkshire.

In 2020, England’s most capped player Jade Clarke became the first ever signing for the club and in February 2021 the team competed in their first ever Superleague Netball game against Celtic Dragons. The league newcomers finished the season with a place in the Vitality Netball Superleague finals weekend, securing a fourth place finish in first ever season.

After playing their first season at central venues, for the majority behind closed doors, in 2022 the team will return to Yorkshire and are hoping to inspire a new generation of netball fans and players. 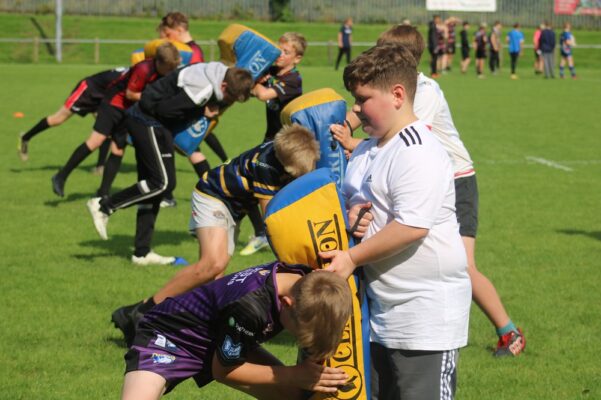 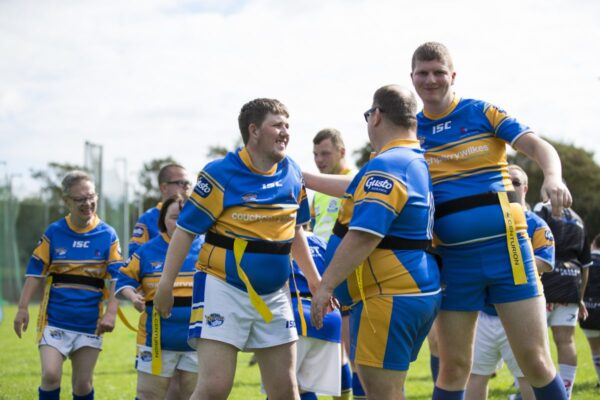 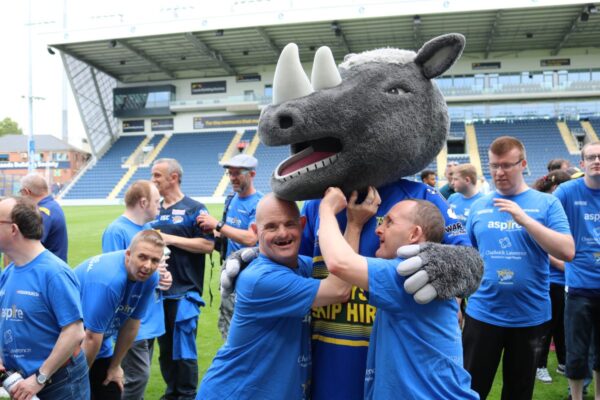 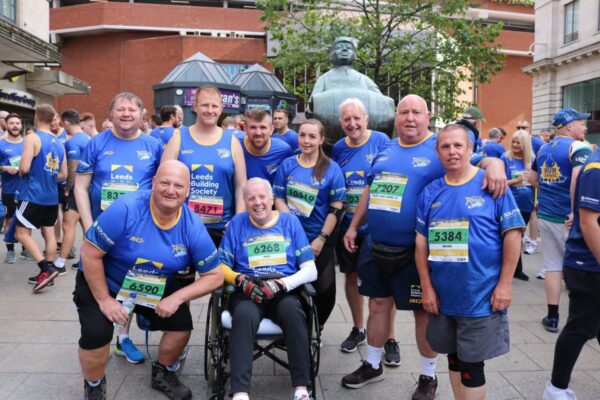