Trinity gained revenge for the last-minute defeat against the Rhinos earlier this season, with Darren Dean scoring the crucial try in an 18-12 win.

The game had started with a perfectly observed minute’s silence in memory of Elliot Burton, a 15-year-old Wakefield fan who sadly passed away last week.

With the match underway, Connor Lynes’ try gave Wakefield an early lead, before Sam Zeller collected a long pass from Chris Hall out wide and cut inside two defenders to level up the scores at 6-6.

The scoring pattern continued, with Wakefield regaining the lead after some sloppy Leeds defending but were pegged back again just minutes later when player-coach Dan Roberts crashed over the try line. Owen Lockwood’s conversation made it 12-12 with five minutes left to play, but Trinity snatched the win and the all-important two league points when Dean, who has recently returned from a trip to the Gold Coast with some of his teammates, burst through a gap to score.

Leeds bounced back from that disappointment though with a 34-6 win against a Wigan team who are still building in their first year of competition- Young (2), Lockwood (2) Zeller and Gobin all grabbing tries.

Elsewhere, Warrington Wolves claimed victories over Castleford and Wakefield in their home PDRL festival to pull clear at the top of the 2019 table, on an action-packed day which even featured a cameo appearance by Benny Westwood.

The Wolves were in need of a smile after a dramatic night on and off the field in their Super League fixture at Catalans. Westwood provided it, at the end of a week in which the old warrior had confirmed that this will be his farewell season, surprising the crowd by taking to the field in the top of the table clash with Wakefield Trinity.

Despite being hit with a thunderous tackle by Dean, Westwood and his Wolves side had the last laugh, earning a 12-10 victory thanks to two tries from Tony Seward, the winger who commutes from Tiverton in Devon to train and play in Warrington.

Warrington had already won the first of their two games at the Victoria Park ASICS Arena, which attracted more than 1,500 spectators showing off the overwhelmingly positive side of Rugby League in the town, with the PDRL festival running as part of a double-header with the Women’s Championship game between the Wolves and Barrow Raiders.

The Wolves PDRL team also beat Castleford 18-0, although the Tigers competed strongly – and had a celebrity fan themselves in former player Rangi Chase, cheering on his good friend Kenan Wilkes.

There is one more festival of the regular PDRL season remaining, at the RFL’s Grand Day Out in Blackpool on September 7th, before the 2019 PDRL Finals Day at Weetwood Sports Park on September 29th. 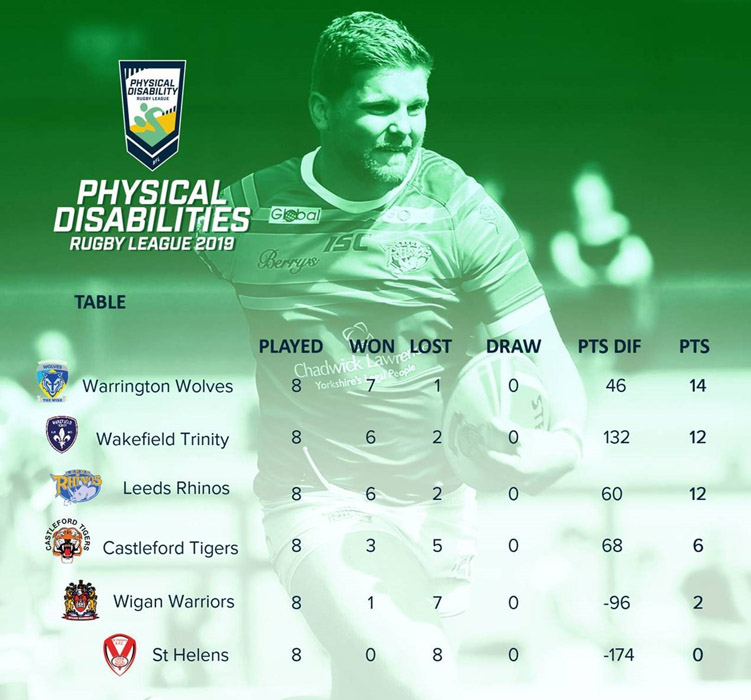