Leeds Rhinos Foundation’s Physical Disability Rugby League (PDRL) side are gearing up to play in the first ever PDRL Finals Day on Sunday.

A bumper crowd is expected at Selby RUFC’s Sandhill Lane to watch the top four sides from the six-team PDRL League battle it out to be crowned champions.

First up for the Rhinos will be a semi-final with West Yorkshire rivals Wakefield Trinity, with the winner going on to face the victors of the other semi-final between Warrington Wolves and Castleford Tigers in the inaugural PDRL Grand Final.

It’s one win each so far this season, with Rhinos defeating Wakefield 16-12 in the first PDRL League festival of the year back in May, before Trinity gained revenge by winning the second fixture 18-12 at Warrington’s Victoria Park Stadium in August.

Rhinos enter the final in mixed form with three wins and three defeats in their last six matches, finishing in third position in the PDRL League table- two points behind their semi-final opponents Wakefield and four behind the unbeaten league leaders’ Warrington.

However, Dan Roberts’ side will be returning to full strength for the inaugural finals series, with star players Chris Hall, Sam Zeller and Tom Lockett all returning to the squad after missing out through injury at the Grand Day Out.

That’s something which Roberts, who took over the reins at the start of the season, believes will be a huge boost for the team going into their season finale.

“I’ve said to the guys that I would rather lose a couple of games during the season and then come back strong to win these last two important games of the year,” said Roberts.

“I couldn’t have asked anything more from the team this year, they’ve given everything for the shirt. We’ve got a couple of bodies returning now for the finals so fingers crossed we’ll bounce back and finish on a high.”

“It’s always a tough battle against Wakefield. They’ve got a good set of forwards and a great halfback in Darren Dean who likes to dictate the play and throw the ball about. We know it’s going to be a tough game but if we go in fully prepared and at full strength, which we will be, then we’re confident that the game is there for the taking.”

On Finals Day, he added: “It’s a fabulous opportunity to showcase the sport on a big stage and if we can get a big crowd down to cheer on the side it would be brilliant. Hopefully there will be plenty of Rhinos fans who come along and they can see another Leeds Rhinos side lift some silverware after the success of the Women and Wheelchair teams this year.”

The action begins at 1:30pm as Wigan Warriors, who finished fifth in the league table, face Warrington Wolves ‘B’ in a curtain-raiser, ahead of the two semi-finals which kick off simultaneously at 2pm and the all-important Grand Final at 3pm.

Entry to Selby RUFC is free for all spectators, with gates opening at 1pm. Matches will also be streamed live via the UKRugbyLeague YouTube channel. 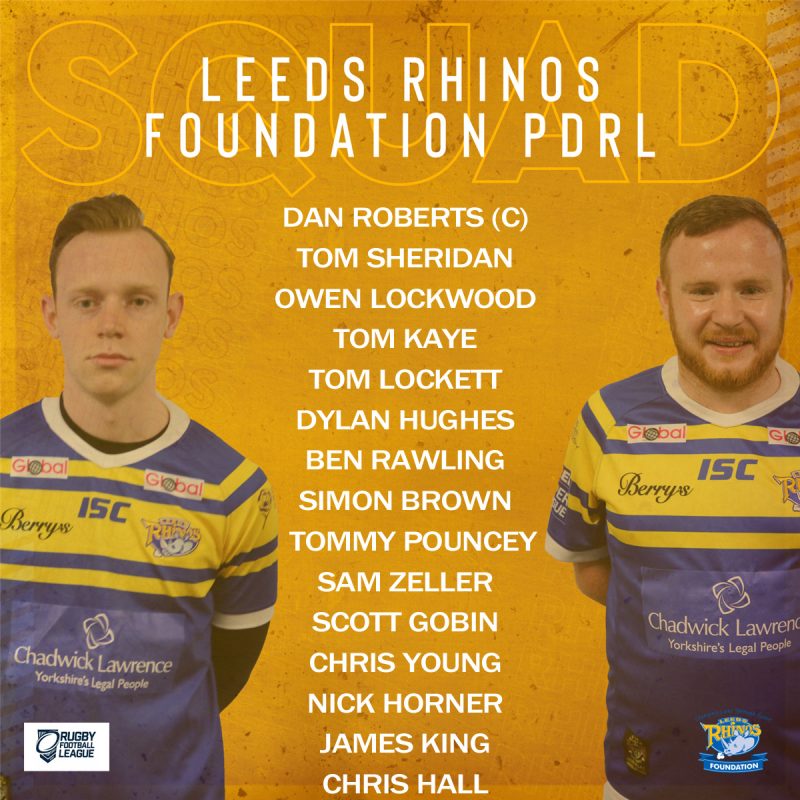