Pupils at a local primary school were treated to an inspiring talk from Leeds Rhinos PDRL player Chris Young last week, who taught them all about the sport and his own personal story.

Young was invited to be the special guest for a virtual assembly for Sherburn Hungate Primary School last week after his good friend and teacher at the school Mr Rushworth had watched some footage of PDRL and learnt more about Chris’ own achievements in the sport.

Having overcome a congenital amputation to his right arm at birth, the flying winger talked to the children about his disability and how PDRL has opened doors for keen rugby players just like him to still play competitive sport and create some unforgettable memories, all while making lots of new relationships and friends for life.

With the first ever PDRL World Cup on the horizon at the end of 2021, the former Milford Marlin also shared his dreams of being called up to represent his country at the landmark tournament and what it means for those who have been involved in the sport since its inception.

Following the assembly, the children created some handwritten letters and notes to thank Young for sharing his story with them. 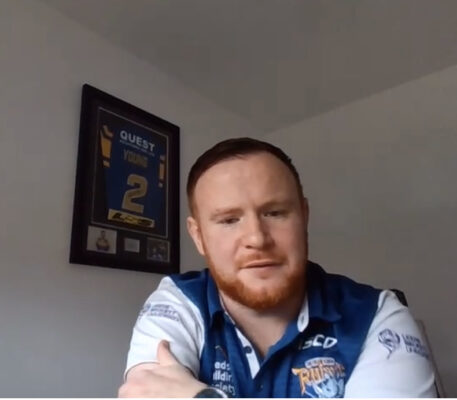 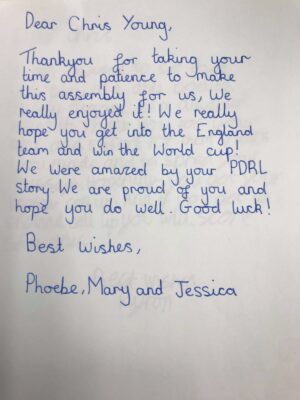 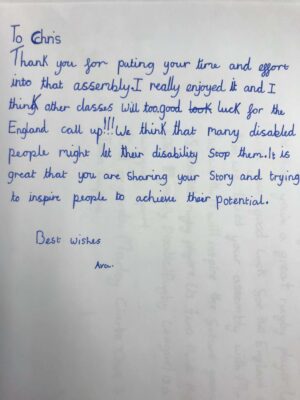 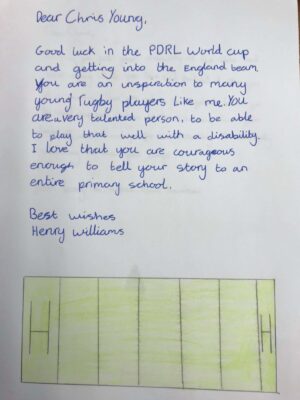 “It was great to speak to the pupils at Sherburn Hungate and share some insight into what’s it been like to represent Leeds Rhinos as a PDRL player,” said Young.

“When I started playing PDRL three years ago, part of the reason I wanted to get involved was to help grow the sport and tackle stereotypes around disability, which is why I’m always keen to go promote it out in the community.

“Even if that child listening to my story doesn’t have a disability themselves, they might have friends or family members which could really benefit from them learning about PDRL and how the power of sport can help change lives.

“I’ve had some great responses and it was touching to receive the thank you letters they wrote, it really meant a lot.”

With the roadmap out of lockdown now released and some light at the end of a long tunnel through the pandemic, Young is now setting his sights on getting back onto the rugby field with his teammates to stake his claim for a spot in England’s side at the PDRL World Cup this Autumn.

“The fact that just three years on from playing the first ever match of PDRL in this country against Warrington we’re preparing to host a World Cup is just incredible. It’s been a remarkable journey and it will be a fantastic celebration of PDRL at the end of really challenging period for us all.

“It would be a dream to be selected. I’ve always said that representing your country in any sport is the greatest honour, so everyone will be pushing themselves and trying their hardest to be a part of it.”

For more information about the PDRL World Cup 2021, click HERE.