It’s the kick that’s being watched around the world.

It was a historic moment for the PDRL game, with James, 22, thought to be the first blind player to successfully make a conversion in an official match. The magnitude of this achievement has not been lost on the rugby league family, who have sent in hundreds of messages of support and congratulations to the winger for his incredible kick.

A lifelong Leeds Rhinos fan, James was diagnosed with macular dystrophy at age 12 and because of his visual impairment had never believed it would be possible to play Rugby League until he was invited by friend and now teammate Scott Gobin to join the team back in 2019.

Since then he believes that taking up PDRL has completely transformed his life, both physically and mentally.

“I honestly never expected anything like this to happen to me. Playing in PDRL has completely changed my life and given me a new lease of life and a new found confidence.

“Growing up before I lost my sight I wanted to be a rugby player, but I’ve never really had that confidence and I never backed myself to go out and do it.

“I remember sitting with my friend a year before starting PDRL and telling him I’d love to play, then just like that I was suddenly playing PDRL for the Rhinos which was incredible and a dream come true. 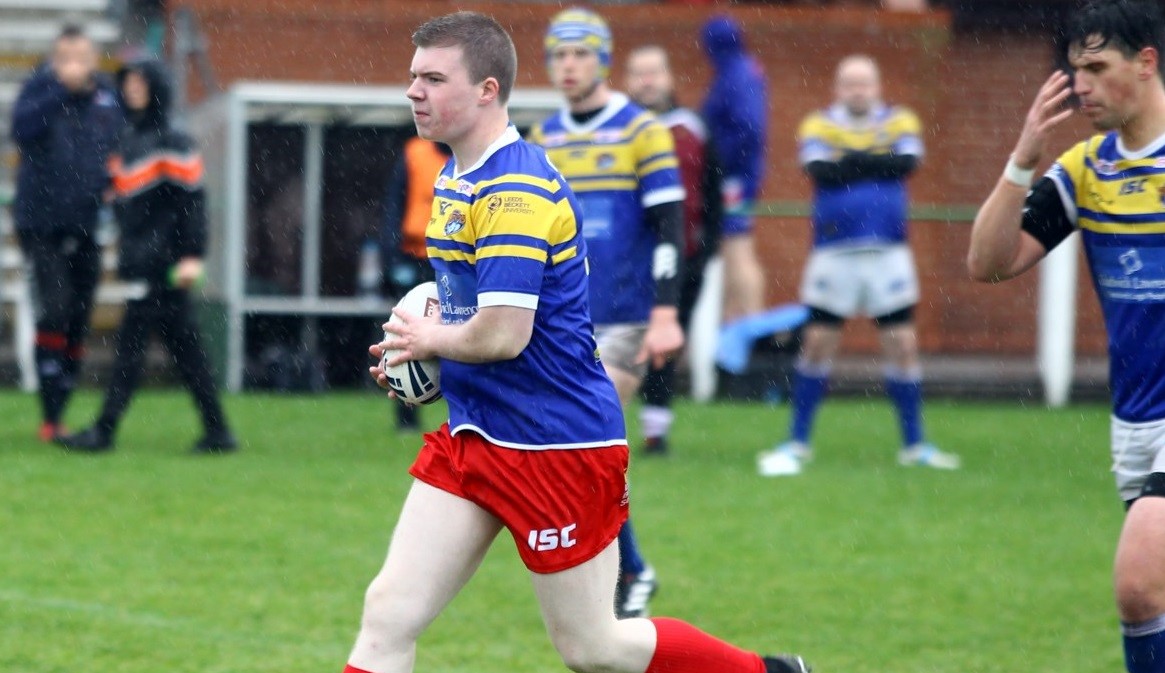 “I feel like I can do whatever I set my mind to do, and I feel like a different person. I love being part of the team and I enjoy every single training session or match we play.”

With the Rhinos leading in Sunday’s curtain raiser, James was given his chance to make history and fulfill one of his dreams by stepping up to make a conversion following Peter Clarke’s game-clinching try.

It was a moment enjoyed by the entire Rhinos team, with jubilant scenes on the sideline as the ball flew over the posts in sensational fashion.

There was also applause given by Marc Sneyd- the leading goalkicker in Super League last season- while Last Leg host and Warrington Woves PDRL player Adam Hills wrote: “This is pretty amazing”.

The video of the conversion- captured by Team Manager Ben Berry- has now been viewed over 200,000 times in total, even making the BBC News headlines and leading to James carrying out interviews with local, national and international press.

James King said he heard the screams and thought: "That's probably gone over!"

James, who said he only realised the kick has gone over when his teammates began to celebrate, has been totally blown away by the response to his special moment.

“Honestly, it’s just mad. I never expected to receive all this support and admiration, I really appreciate all the messages of support I’ve received.

““I had been practising the shot in training, but I didn’t expect to get a chance to kick one in a game. I was so nervous to step up as there is so much pressure and I just didn’t want to mess it up, because it could have gone so wrong with it being right in front of the sticks.

“I was counting the steps that I needed to take and then I just ran up and tried to strike it cleanly. Once I get so far from the ball I struggle to see it cleanly so I have to know I’m in the right place to strike it.

“You don’t really feel the ball much when you connect so it was only when I heard everyone going wild behind me that I thought ‘that’s probably gone over.’

“It was just a really special moment for me that I never expected to reach as many people as it has.”

For more information about Leeds Rhinos Foundation’s PDRL team, and how to get involved, please contact ben.berry@leedsrhinosfoundation.org.