Leeds Rhinos Foundation is delighted to announce the launch of its first ETP 14+ squad as part of its partnership with the England Talent Pathway programme.

The official charity of Leeds Rhinos became partners of the award-winning national programme back in July and is now extending its delivery to include a new open-access player development scheme for Under 15s and Under 16s non-scholarship registered players.

The first phase of the programme will consist of four training nights at Leeds Rugby Academy in Kirkstall, giving players the chance to utilise the Rhinos’ world-class training and conditioning facilities. In addition, the team will take part in fixtures against ETP squads from Featherstone Rovers, Hull FC and York City Knights.

Hardman said: “We are really excited about launching the next phase of our ETP programme. This will be the first time Leeds Rhinos have established an ETP 14+ squad and we see this as a fantastic opportunity for all Under 15s and Under 16s across Leeds to develop their skills further and stay engaged in the game through the winter months.

“It will also act as a fantastic CPD opportunity for our coaches, both from within Leeds Rhinos Foundation and our Ambassador community clubs, by working closely this squad on the ETP programme.”

THE ETP SQUAD IS NOW SOLD OUT. 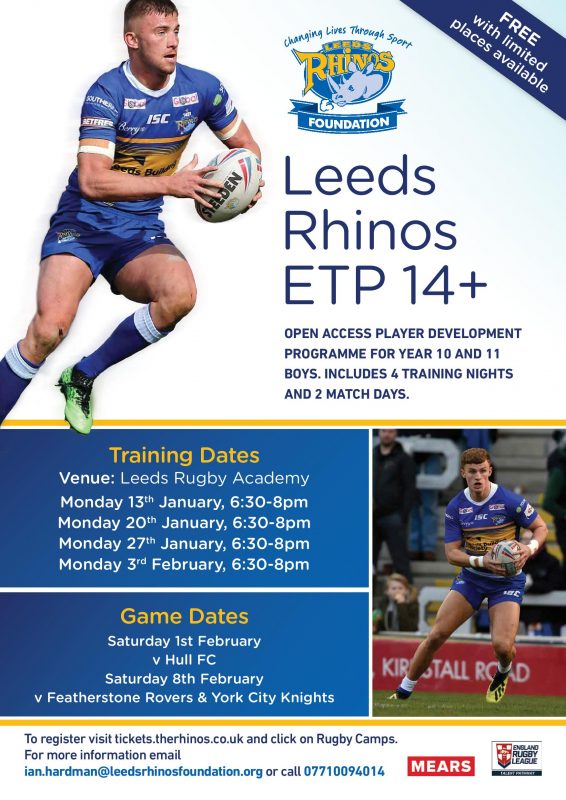